The American Prospect | Biden on the Farm

President Donald Trump has repeatedly assured America’s farmers that he “love[s] and respect[s]” them, calling them “great patriots.” But on his watch, a trade war ravaged their sales, leading Trump to institute a bloated and poorly targeted bailout program. Also on his watch, about 75,000 meatpacking, food processing, and farm employees have gotten sick with COVID; nearly 350 have died.

The agriculture sector is suffering. President-elect Joe Biden saw as much, laying out a plan on the campaign trail that promised to “stand up for American farmers.” Much of what he wants to do would require acts of Congress and therefore cooperation from Senate Republicans, particularly should they hold on to their majority in the Georgia runoff elections. But there are plenty of significant actions Biden can take on his own to help farmers and farm- and food workers right away.

His program should start, perhaps unsurprisingly, with undoing actions that President Trump took unilaterally. “The Trump administration put us back to 1906 when Upton Sinclair wrote The Jungle, when there weren’t any controls,” said Joe Maxwell, president of Family Farm Action. Restoring regulations and programs Trump obliterated goes a long way to extricating us from Sinclair’s jungle.

One important move would be undoing Trump’s farm bailout, a mea culpa for his trade war that hammered American farmers. After Trump levied billions in tariffs on many foreign-made products, American farmers shouldered the retaliation as their sales abroad dried up, particularly in China. To make sure rural America stayed in his column, Trump started sending farmers direct payments, which came to $28 billion in 2018 and 2019, larger than the entire 2008 auto bailout. Most of the money has been funneled to the wealthiest 10 percent of farmers—many of them corporate operations, not actual family farmers.

Biden should “scrap it and start over,” argued Scott Faber, senior vice president for government affairs at the Environmental Working Group. The new president could redesign relief so that payments are not based on production levels, as they are currently—under which larger, corporate farms that produce more get larger amounts—but instead based on proof of real financial need.

That can also free up Biden to take his own proactive steps. Once he undoes Trump’s farm bailout, he can repurpose that money to protect farmworkers during the pandemic, Faber said. He can and should direct it instead “for personal protective equipment, but also to help reconfigure [meat and poultry packing] plants to make them safer and to make sure that workers have suitable housing and transportation,” he said. It should also fund spaces where sick farmworkers can go to self-isolate, he added.

In 2018, Trump’s agriculture secretary, Sonny Perdue, used the discretionary authority in the Commodity Credit Corporation to draw down funds to create the farm bailout in the first place. “There’s nothing that would prohibit the incoming secretary of agriculture from using the funds” for another purpose, Faber said.

Another urgent item awaiting correction are the waivers that the Trump administration granted to meat and poultry processing plants to speed up their lines. This year, 15 poultry plants were given permission to increase their line speeds above the current Department of Agriculture cap, allowing them to kill and process more birds per minute despite their previous histories of serious accidents.

Worker advocates have warned that the increased speeds will mean more injuries for workers in an already dangerous workplace, and animal rights advocates argued workers will have even less time to ensure humane slaughter techniques. The danger has only grown during the pandemic: Researchers found that plants that received these waivers saw their surrounding counties experience a disproportionate rise in COVID cases. Trump also issued waivers allowing pork plant employees to increase line speeds and to self-inspect animals coming down the line, which put an end to those USDA inspections.

Biden can halt any further waivers, as well as abandon a rule that the Trump administration is trying to rush through to permanently raise the maximum line speeds in poultry plants by 25 percent. (The rule is unlikely to be finalized before Biden takes office.) And he should consider repealing the existing waivers, Maxwell said—not just for the safety of workers and the animals they slaughter, but for the safety of consumers’ food.

What Biden’s immediate to-do list amounts to, noted Deborah Berkowitz, worker health and safety program director at the National Employment Law Project, is just “trying to undo a lot of what has been done.”

The new president could redesign relief so that payments are not based on production levels, but instead based on proof of real financial need.

Then there are a number of things Biden can do to rein in the corporate consolidation that has ravaged the agricultural sector. “We have to break the control that these big packers have over the food system,” Maxwell argued. Today, just six companies slaughter two-thirds of the country’s livestock; two-thirds of the hog market is controlled by four firms, while four beef companies control 85 percent of their market. Small farms struggle to compete with their concentrated operations, and these big conglomerates also control most of the feedlots and are also the main purchasers for smaller farmers’ products, making it nearly impossible to escape their power.

The Grain Inspection, Packers and Stockyards Administration (GIPSA) is tasked with promoting fair practices in the industry, including preserving competitive markets for meat and poultry. It grew out of the Packers and Stockyards Act of 1921, which was passed explicitly to bust the trusts that controlled and manipulated the industry. But Trump all but eviscerated the agency when he moved it under the Agricultural Marketing Service and turned it into a program, not an agency. “The Trump administration took all the teeth out of the antitrust law that protects farmers,” Maxwell said. It was so weakened that when the Government Accountability Office looked into whether there was collusion in beef prices, it noted that the Packers and Stockyards Program didn’t even have access to the data it needed to determine the answer.

Biden can revive GIPSA by restoring its authority as an agency. But he can also give it far more power by undoing the loosening of standards for approving mergers put in place by the Reagan administration. He could restore the standards that would block mergers that could create market manipulation, thus reviving the original consent decree reached by Woodrow Wilson’s attorney general in 1920 with the largest meat corporations, which required them to divest from some of the business lines they had accumulated. Reagan’s changes have stood through subsequent Democratic and Republican administrations alike, but it wouldn’t require cooperation from Congress to reverse them. “That was unilaterally done by the Reagan administration, and it can be unilaterally reversed by the Biden administration,” Maxwell noted.

Personnel is always policy, and under the Trump administration, the Department of Agriculture “has been run by essentially the industry,” Berkowitz said. “There is absolutely no concern about food safety issues that I can tell, or about worker safety.” But even under previous administrations, the department has hewed more closely to corporate interests than workers’. “The corporate side of agriculture, the industrialists, ruled at USDA,” Maxwell said. “We need a new bench.”

Biden’s appointments could bring a greater focus to equity, especially racial equity. Trump’s farm bailout has disproportionately gone to white farmers, continuing a long history of racial discrimination at the USDA. Two key political appointees oversee food safety, the undersecretary and deputy undersecretary, and Biden can fill those slots with “people who have a background in public health and do not come from the industry,” Berkowitz said. Her organization is currently putting together a list of people Biden can consider naming to the Department of Agriculture.

As the Biden-Harris administration also seeks to imbue agencies throughout the federal government with a focus on climate change, and to take significant early steps toward curbing it, Maxwell also wants them to ensure that farmers are part of the solution. “We would strongly encourage the president to have the farmer or farm voice at the table,” he said. “Too often, the farmer is left out.” Farmers, after all, are acutely aware of how climate change is creating extreme weather patterns. Biden could even kick-start agriculture-focused solutions by using Commodity Credit Corporation funds to reward farmers who change their practices to reduce emissions, Faber said.

“I’m hoping the Biden administration sees the difference between advocating for farmers,” Berkowitz said, “and caving to billion-dollar meat plants that are thumbing their noses at their workers and the communities they’re based in to line the pockets of a few corporate executives.” 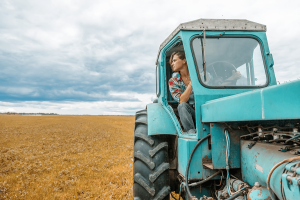